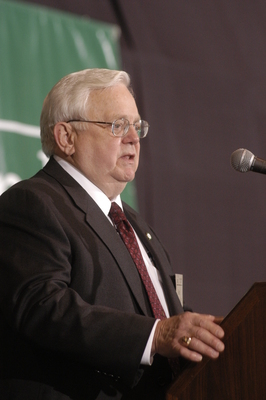 Compete with yourself. The odds for improvement are overwhelming! Bob Davis wrote this slogan for himself while he was a student at Illinois Wesleyan. The words have served him well throughout his career, and he still keeps them handy. After graduating with a bachelor's degree in chemistry, he took a job with the Pure Oil Company. He entered the Army in 1956, first stationed at the Petroleum Products Laboratory Base at Yuma, Arizona Test Station, then Fort Ord, transferring to an Army hospital group where he set up standards for hematology. In 1958 he joined the General Chemical Division of Allied Chemical and went to the Wabash Chemical Corporation in 1960-all the while working privately on an untested product he was developing for use in refineries. When Wabash Chemical was dissolved, Davis found himself in a money crunch, with a wife, three children, and a mortgage, but that didn't even slow him down. With the help of a friend, he was able to present his new catalyst to an oil company in Minneapolis-St. Paul. He stayed at the plant for hours on end, taking readings and hoping his new product really did work. The answer came when the chairman called him to come back to Minnesota and offered him more money than he expected to earn in his lifetime. "I figured if it was worth that much to them, it was worth more to me. I didn't sell." Instead he formed the R. E. Davis Chemical Corporation and the rest, as they say, is history. His laboratory relies primarily on "instrumental analysis" rather than traditional "wet chemistry." Law enforcement and industrial experts have called it one of the best-equipped facilities in terms of experience and instruments in the country. His assistance is regularly sought to help solve various chemical problems, and he testifies all over the country as an expert witness. He has consulted for trials involving chemical questions and is recognized as the world's expert in the field of alkylation gasoline manufacturing. In 2004, the National Petrochemical & Refiners Association (NPRA) presented Davis with the Peter G. Andrews Lifetime Service Award, which honors the contributions made by members to the value and vitality of the NPRA Technology Q&A. Davis a Theta Chi at IWU, married Sara Ann Ivie in December of 1957. A Kappa Kappa Gamma art major, she earned her BFA from Illinois Wesleyan in 1955. They are parents of John, James, and Susan.