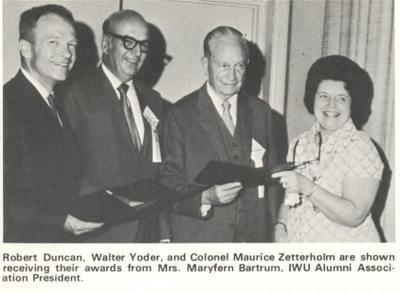 Robert B. Duncan received a Bachelor of Arts degree from Wesleyan in 1942 and a Bachelor of Laws degree from the University of Michigan. He served as a lieutenant, j.g. in the Naval Air Force in World War II. He was a member of the Oregon House of Representatives from 1956 to 1962 and was elected to Congress in 1962 and 1964. He lost a close election to Mark Hatfield for a seat in the U.S.Senate in 1966 and lost to Wayne Morse for a Senate seat in 1968. He currently practices law in Portland.