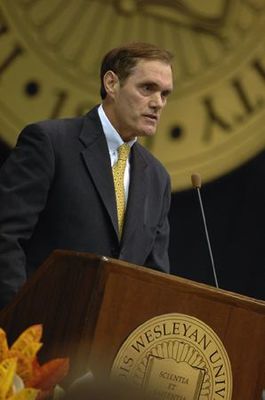 Lawrence graduated with an economics degree from Illinois Wesleyan in 1972, earning an MBA from Harvard in 1980. While an IWU student, he was Vice President of Student Senate, Treasurer of IFC and a member of Phi Gamma Delta and Alpha Kappa Psi. His business career involves, among other things, international trade with China for over 30 years. He is the Co-Chairman of Comway Capital Group, a Shanghai holding company of 14 Chinese companies. He is also a Managing Director of The McLean Group of Virginia, which is a middle market investment banking firm. Lawrence has played a founding role in the formation of other businesses in which he maintains significant ownership positions and/or Board of Directors participation. He was also a Director of a management company of third-party direct investment funds with assets in excess of $350 million. From 1991 to 1995, Lawrence was the CEO of United Pacific Holdings, Ltd. - a holding company for investments in manufacturing companies of China and other East Asian nations. From 1985 through 1991, Lawrence served as the Deputy Assistant Administrator of NASA’s Office of Commercial Programs, advancing all high technology projects that had commercial potential. Lawrence served on the direct staff of President Ronald Reagan in the White House from 1983-1985. Lawrence resides McLean, Virginia with his wife Pia and two children.