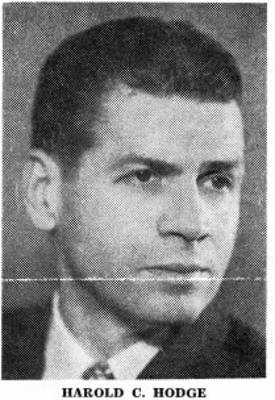 Dr. Hodge, who graduated from Wesleyan in 1925, majored in chemistry. He continued his work in science at the University of Iowa and later became affiliated with the University of Rochester medical school. At present he is in charge of research at the university. When the first atom bomb test was made at Bikini following World War II, Dr. Hodge was selected as a special observer. His work was to help determine the effect of radioactivity on human beings. When the official pictures were released by the government he was one of those chosen to lecture with the showing of the pictures.Dr. Hodge is responsible for the Mortimer Award, which is given each year to the senior at Wesleyan who is outstanding in chemistry