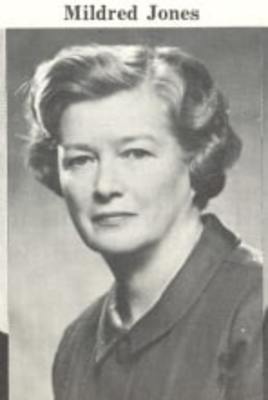 Mrs. Jones, a Bloomington-Normal native, received a Bachelor of Arts degree from Wesleyan in 1933. She also holds a Master of Arts degree from the University of Chicago. Her father was the late Judge Louis Fitz Henry who was born in Bloomington in 1870 and lived here until his deathin 1935. Judge Fitz Henry received a Bachelor of Laws degree from Illinois Wesleyan in 1897. Mrs. Jones is national vice president of the Young Women's Christian Association and serves as the United Nations coordinator for the World YWCA. She became a member of the National YWCA board in 1953 and has also been active in local YWCA organizations in New York and Tennessee. Her husband, Paul Jones, also attended IWU. He is the president of the Carpet Wool Council. Presentation of the Distinguished Alumni Award was made by Ed Dirks '43, president of the Alumni Association.