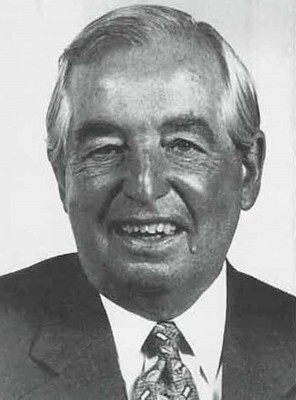 A 1950 graduate, Gene A. Nuziard of Los Angeles is currently chairman of the board of directors of the Queen of Angels - Hollywood Presbyterian Medical Center in Los Angeles. In 1996, Queen of Angels was selected as one of the nation's top-performing hospitals by the 100 Top Hospitals - Benchmarks for Success study. Upon graduation, Nuziard worked in a variety of capacities for Gordon Baking Company in Chicago, beginning as a baker and moving up to company president. Nuziard was also president of Silvercup Bakeries in Detroit, and in 1966 he joined I.T.T. Continental Baking Company, holding a number of administrative positions and rising to executive vice president of the corporation. He retired in January 1991. Nuziard also serves as director of the Daiichiya Loves Bakery, Inc., in Honolulu; a trustee of the American Institute of Baking; governor of the American Bakers Association; vice president of the Food Industry Circle of City of Hope charity; and as chairman of the Queen of Angels - Hollywood Presbyterian Medical Center charitable division. He is a member of Theta Chi fraternity.Nuziard and his wife, Marilyn, a Northwestern graduate, have been married since 1956.