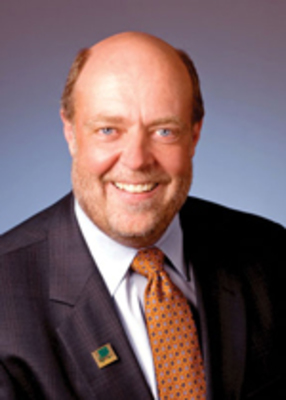 Bob is president and CEO of The University of Kansas Hospital. He joined the hospital in 1996 as vice president of organizational improvement and later served as chief operating officer. Bob was named president and CEO in 2007. Bob has played a strategic role in The University of Kansas Hospital’s transformational journey from a financially troubled organization with poor patient and staff satisfaction to one of the top academic medical centers in the country. Under Bob’s leadership, the hospital has received Magnet recognition and been named to U.S. News & World Report’s Best Hospitals list for the past seven years (since 2007). Ten of its specialties ranked among the nation’s top 50 and is ranked number 3 in quality and accountability among academic medical centers by the University HealthSystem Consortium. Upon graduation with a degree in accounting, Bob began his career as a CPA for Pricewaterhouse (now Pricewaterhouse Coopers). He has endowed a scholarship in accounting in honor of his mother and in gratitude for the education he received at Illinois Wesleyan. From public accounting Bob moved into internal auditing at Jewish Hospital in St. Louis and gained extensive experience in the healthcare industry in financial and auditing positions. As a CPA, Bob decided to focus on healthcare and said in an interview, “Nothing I have done or will ever do professionally will be as meaningful. Helping people in critical moments of their lives provides lasting satisfaction.”