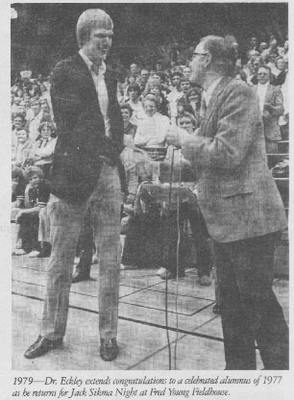 Sikma, one of the better known alumni in recent years for his star performances on the collegiate and professional basketball courts, was unable to accept his award in person at the Alumni Day luncheon. It will be presented early this summer when he returns to campus for his annual basketball camp for children. Since graduation he has played center for the Seattle Super Sonics team in the National Basketball Association. Sikma has appeared in seven NBA all-star games, led the Sonics to the NBA title in 1979 and set numerous team records. He and his wife, Shawn, live in Bellevue on Lake Washington, and they expect their first child in July