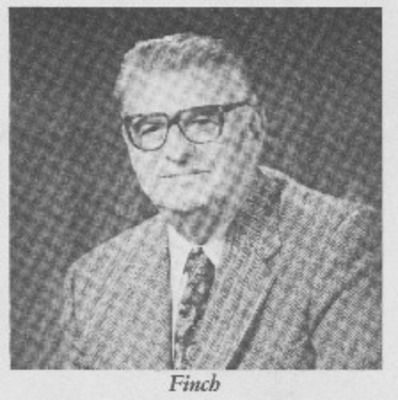 Charles W. Finch '36 of Mount Morris will receive the Alumni Association's Loyalty Award for his service to the University. He is president of the Finch Corp., a retail furniture store established by his family 65 years ago, and has no interest in retirement as yet. A transfer to IWU after several semesters at DePauw, Finch majored in English, joined Sigma Chi and, most significantly, met Betty Gage '36, an Alpha Gam, who became his bride in 1940. For years, Charles Finch has proved his loyalty to Illinois Wesleyan by his work as a class agent and member of the Alumni Council as well as his active participation in alumni events. He often volunteers to serve as host for alumni area meetings and as a driver in the Homecoming parade. He is a member of the Board of Visitors and was a donor to the fund for the construction and endowment of Evelyn Chapel. The Finches are also members of the John Wesley Powell Society. His interest in civic affairs led to innumerable elected and appointed offices in the Mount Morris area, as well as leadership postitions in the local United Methodist Church.