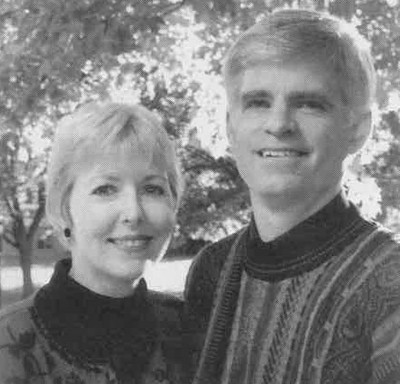 Jim and Sherry Sisk Graehling, both 1972 Illinois Wesleyan graduates, have been active with their alma mater on many levels as both students and alumni. They have served the University regularly as phonothon volunteers, as members of the Alumni Council board, and as their reunion chairs in 1998, 1997, 1992 and 1987. They are members of the IWU Associates, have served on the Campaign Advisory Committee, and were chairpersons for the "50 NOW" fundraising effort. They annually serve as hosts for IWU international students and assisted with the formation of the IWU Alumni web site. After graduating cum laude with a degree in sociology, Sherry worked as a freelance artist while pursuing a second bachelor's degree in art and anthropology at Illinois State University, awarded in 1982. She worked as a graphic designer for Merritt-Edwards Corporation from 1983 to 1988 and, in 1989, began her own company, Elite Graphics. She serves as secretary of the local Old House Society as well as on the David Davis Mansion Foundation board of directors. In sthool, Sherry was active in Alpha Gamma Delta and served on Student Senate. After graduating cum laude with a degree in sociology, Jim went to work as a junior analyst at Bloomington's State Farm Insurance Company, where he now works as a systems specialist. He also earned a second bachelor's degree in 1982 in art and anthropology from Illinois State University. He serves as first vice president on the David Davis Mansion Foundation board of directors. A member of the Acacia fraternity at IWU, Jim won the Acacia "Outstanding Alum Award" in 1977 and served as the chapter's alumni treasurer. Married since 1972, the Graehlings have two daughters- Elizabeth Anne and Katherine Anastasia - and live in Bloomington