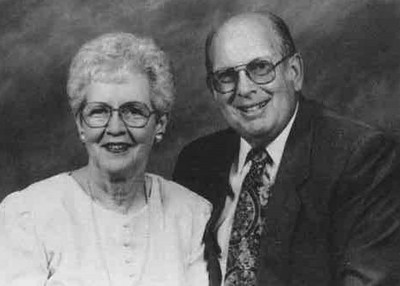 Robert A. and Mary Ann Hagmeyer Guenzler, both 1953 Illinois Wesleyan graduates, have been affiliated with IWU as students, alumni, and parents. After graduation, Bob served as a personnel sergeant for the U.S. Army until 1955, then returned to IWU to earn a master's degree in music education. He taught from 1956-60 in the Charleston (Ill.) school district before moving to the southwest Chicago suburbs to teach vocal and instrumental music, theory, and humanities in school district 218 from 1960-90. During this time he was a professional tenor for the Chicago Symphony Chorus (1967-88) and served as director of music at Blue Island's Grace Methodist Church (1960-66) and at United Methodist Church of Palos Heights ( 1966-91 ). He is a member of numerous professional organizations and was the recipient of the Illinois Music Educators Association "Distinguished Service Award for Dedicated Service to Music Education" in 1992. After graduating with a degree in sociology and psychology, Mary Ann became a professional Girl Scout director with Trailways Girl Scout Council in Joliet, Ill. She substitute taught in school districts 218 and 230, in the southwest suburbs and, as her daughters were growing up, volunteered in all phases of school and scouti~g activities in addition to acting as her church's organist. She worked with the League of Women Voters, serving her local chapter as president and as a board member of the state organization. She spent three terms on the executive committee of the League of Women's Voters of Illinois and two terms as the organization's vice president of citizen education in addition to being the group's secretary-treasurer. Married since 1953, the Guenzlers have three daughters- Susan Getz, a 1977 graduate who is married to 1977 alum Herbert A. Getz; Dr. Marsha Guenzler-Stevens, a 1978 graduate; and Pamela DeBoer - and six grandchildren. The Guenzlers have served Illinois Wesleyan as class agents, as members of their reunion committee, have hosted alumni "Connections," and have appeared at virtually every alumni event staged in the Chicago area.