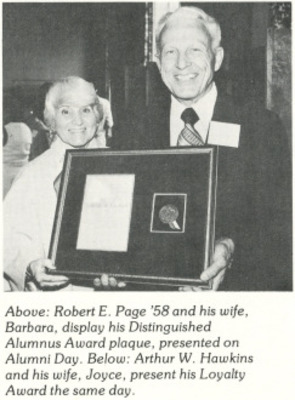 Elgin insurance man Art Hawkins knows that the best policy forsuccess in fund raising is hard work and an unflagging devotion to the cause. And when he's working for Illinois Wesleyan, he works even harder. Hawkins is currently serving his second year as General Chairperson for the Alumni Fund, after achieving several all-time record records in the 1977/78 campaign. He became active in the Fund in 1970 as a 1938 Class Agent, then served as Class Chairperson from 1971 through 1977. He has demonstrated his loyalty to Wesleyan in many other ways as well. For the past five years, he has been active as a night captain and caller for the Chicago Area Phonothons, and the notes of encouragement he has written to Alumni Fund volunteers have stimulated them togreater effort and were a strong factor in last year's successes. An enthusiastic supporter of Titan football and basketball, Hawkins attends as many games as possible and often writes the Alumni Officefor extra game schedules to give to friends and fellow alums in the Chicago area. He is also a member of the Century Club.Civic activities include work for the Boy Scouts, PTA and Community Chest. Last summer he retired from a long-time position with the State of Illinois Employment Office and is now employed in insurance sales. He and his wife, Joyce, are parents of four children.