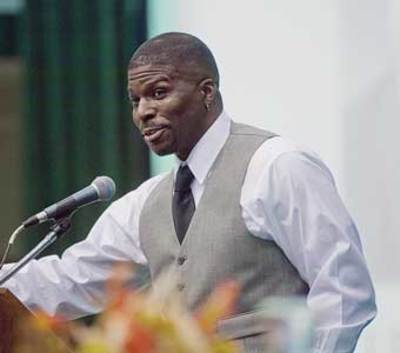 While at IWU, Deon was an Executive Board member of the Black Student Union for two years, as well as a three-year letter winner in football (member of the undefeated 1996 team) and a member of Tau Kappa Epsilon fraternity. In 1999, he became an Executive Board member of the Minority Alumni Network, which he co-chaired for six years. He raised the group’s profile as a result of his hard work and universally infectious personality. Deon was also an Executive Board Member of the IWU Alumni Association for 10 years, where he volunteered for numerous committees. Deon stays in contact with a wide variety of alumni and IWU faculty/staff. He continues to be a role model and mentor to Titan football players and students on campus participating annually at the minority mentoring session for students at Homecoming and in the annual Multi Racial, African, Latino, Asian and Native American (MALANA) orientation for first-year students and their parents. Deon is currently a Regional Underwriting Manager for the Private Client Group of Chartis Insurance in Schaumburg, Ill. , where he lives with his wife, Mona (Williams) Hornsby ’00.