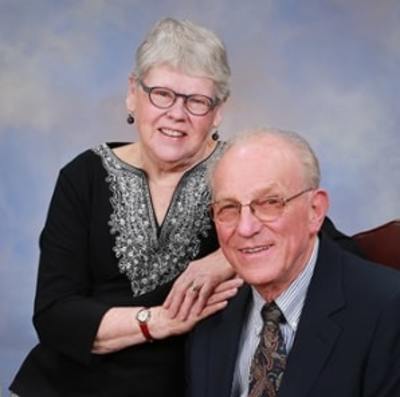 John and Pat (Lashbrook) Jordan graduated from Illinois Wesleyan in 1957 and 1959, respectively. While students, both chaired the Religious Activities Commission of the student government and were active in other organizations. John was state president of the Methodist Student Movement and served on its national committee. He was awarded a Rhodes Scholarship and, after graduating from Illinois Wesleyan, he studied politics, philosophy and economics at Oxford University. He then earned a graduate degree in divinity from Drew University. While living in New Jersey, Pat went on to earn a master's degree and taught for 15 years. She served as president of the Education Association, was active in Citizens for Public Education, and also served as the district reading specialist. The Jordans lived in Teaneck, New Jersey, while John worked for the United Methodist Church, but later returned to Illinois, where he served as the Executive Director of the University of Illinois YMCA. Pat taught at Parkland College for ten years. John joined the IWU Board of Trustees in 1992 and has served on many committees, including the committee for re-accreditation. Since retiring in 1999, the Jordans have visited over 20 countries and much of the U.S. Both have served on committees at Wesley United Methodist Church at the University of Illinois Urbana-Champaign. They served as emcees for the Golden Titans homecoming dinner in 2017 and have been loyal supporters to the University through their donations and service.