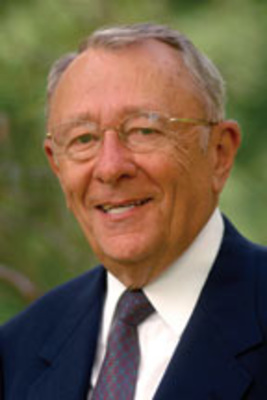 Walter W. Moore graduated from IWU in 1952 with a Bachelor’s degree in Business Administration. A native of Bellflower, IL, he attended IWU as a returning GI after serving in World War II and the Korean War. Walt and his wife Joanne attend most IWU athletic events. Walt established the sports “fan bus” program, created to provide accessible transportation, food, and overnight accommodations for Titan basketball fans. He has served as the president of the IWU Alumni Association after being elected in 1981. Walt spent 41 years at State Farm Insurance and was involved with the development of the State Farm Foundation Matching Gift Program, which matches employee charitable contributions to eligible colleges and universities. Walt and Edward B. Rust Sr. spent years pursuing this innovative program with IWU in mind. Starting in 1985 and originally limited to $250 per individual, the match has grown to $3,000 with IWU a major beneficiary. Walt and Joanne have been married for over 55 years and have five children and many grandchildren. The Moores have served as a host family for IWU students from Japan, Sri Lanka, England, and Russia.