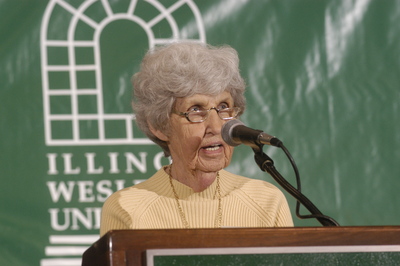 Loyalty to Illinois Wesleyan came early to June Schultz when her father, Dr. W.E. Schultz, became head of the English department in 1934. As youngsters, June and her sister Caroline (Ferme, IWU '46) attended !WU events of all kinds with their parents and enjoyed visiting their dad's classes in Old North Hall. During June's four years at IWU as a history major, a member of Alpha Gamma Delta, and with participation in many campus activities, her admiration and affection for the University grew. On graduation in 1944, her ties with IWU continued: drawing war maps for Rand McNally in Chicago, where she shared an apartment with two other IWU alums; returning home to work in the IWU Alumni Office for 12 years (serving as alumni director her last year there); working for the Gummerman Printing Office which published the Argus and IWU Alumni Bulletin; embarking on a busy 33-year career as a second-grade teacher at Bloomington's Washington School, using many IWU student teachers; simultaneously advising the IWU Terrapin Club, teaching synchronized swimming and producing annual water shows from 1950-72. In 1995, told by President Minor Myers of plans to build a much larger library, June donated to Illinois Wesleyan all of her father's rare books, special literary collections, and photos, letters and autographs of famous people he had met. Over the years June has remained associated with IWU in many capacities: as an alumni contributor, a volunteer worker, and as an AGO alumna advisor. With classmate Margaret Hayes Theis, she has co-chaired several class reunions, including their 60th in 2004, and she has been class secretary for the past 11 years. Retired since 1994, June lives in Bloomington near her niece, Cathy Ferme Duehr, and her husband Ron, and their children, Sarah and Jim.