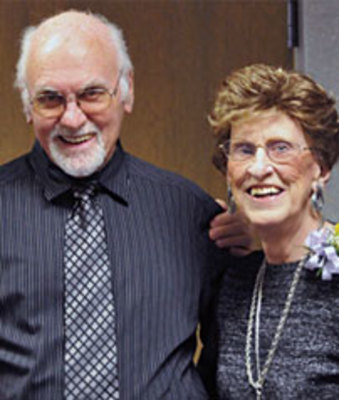 Helen and Chet have maintained their Illinois Wesleyan ties by doing everything from hosting international students to attending sporting events as far away as Salem, Va. Following his graduation in 1943, Chet went on to earn a master’s of divinity degree from Garrett-Evangelical Theological Seminary in Evanston, IL. In 1977 he was awarded a Doctor of Divinity degree from Mac Murray College in Jacksonville, IL. He was an active leader in central Illinois Methodism for 42 years. He was part of the Bishop’s Cabinet while serving in Springfield as District Superintendent. 1980 brought him back to campus as Director of Conference Council on Ministries. He served on the IWU Board of Trustees for four years. Helen has partnered with her husband in serving United Methodist congregations, and also worked diligently as a district officer for United Methodist Women and as a youth leader. She took special interest in IWU’s international students, making friends from many countries. She has chaired class reunions and also was an IWU class agent along with Chet for the decade of the 40’s. The Sheldon’s loyalty embraces the music and theatre programs. Helen celebrated her 90th birthday party in the fourth floor rotunda of Ames Library where guests received a copy of her poetry entitled “Poems from the Heart.” Helen and Chet have three sons, including two fellow alumni: Roger 1964, Gordon and Mark 1970.