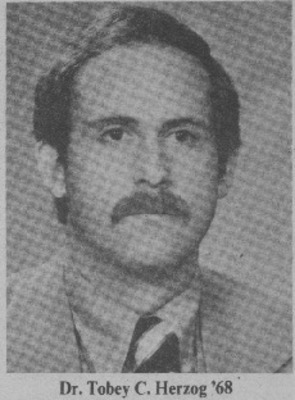 A magna cum laude graduate of IWU, Herzog became a congressional liason with the Army at Ft. Gordon, Ga., where his work earned him the Army Commendation Medal. By 1969 he was in Long Bingh, Vietnam, as a personnel specialist, earning the Bronze Star. Dr. Herzog entered graduate school at Purdue University, which awarded him the doctorate in English literature in 1976 prior to his joining the Wabash faculty. His publications display his wide scholarly interests; the rhetoric of sport, Thomas Hardy, media analysis, Vietnam non-fiction, business and the teaching of writing. He married Peggy Miller '67, a nursing alumna, and they are parents of two sons.