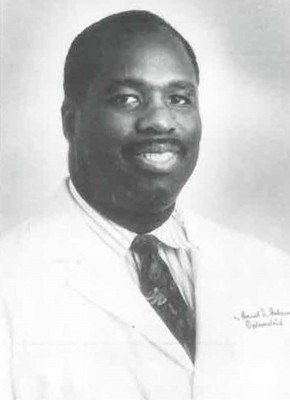 An optometrist, Johnson is the owner of The Vision Salon Ltd., an eyecare center in Blue Island. Part of the first Head Start class at Lincoln Memorial Elementary School in 1965 in Robbins, Ill., Johnson introduced President Bill Clinton at the White House in May 1994, when legislation extending the Head Start pre-school education program through 1998 was signed into law. He received his doctor of optometry degree from the New England College of Optometry and did postgraduate training in therapeutic ocular pharmaceuticals at Illinois College of Optometry. He did externships at Brook Army Medical Center in San Antonio, Texas, and in Boston, Mass. at the Boston Eye Clinic and the Dimock Community Health Center. Johnson is mentorship co-chairman of the IWU Minority Alumni Network, a member of the St. Francis Hospital and Health Center advisory board, participates with the South Suburban ACT-SO, an academic organization for minority students, and a board member of the Plano Child Development Center in Chicago. He is a member of the board of the Robbins Youth Center and a member of the Blue Island Rotary Club. Johnson and his wife, Tangee, are the parents of Jordan Caleb, 2, and Taylor Simone, 1.