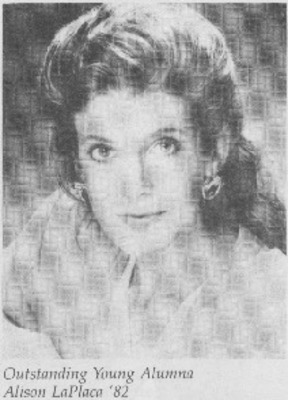 Alison LaPlaca wasted no time after receiving her BFA from Illinois Wesleyan in 1982. After seven leading roles in IWU productions, Alison landed a role in "Diner" (a pilot series for CBS) and went on to become a television series regular in ''The Suzanne Pleshette Show''. She is currently seen as Linda Phillips in "Open House", part of Fox Network's Sunday night programming. Alison has also appeared on television in ' ~ Fame " , "Our House", "Brothers", "Family Ties", "Remington Steele", and "Cheers", along with several television "movies-of-the-week". She has also appeared in three theatrical films: "Madhouse!", "When The Rain Begins to Fall", and "Fletch." Ms. LaPlaca returned to Wesleyan in 1985 to speak to School of Drama students. We welcome her back again as the 1989 Outstanding Young Alumna.