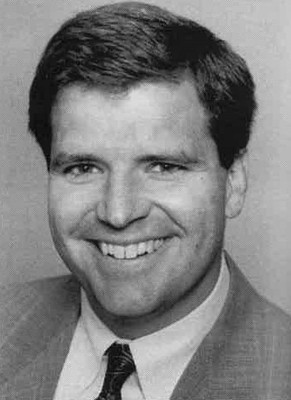 When elected in 1993, Bill Brady became one of the youngest people ever elected to the Illinois State House of Representatives. As Republican representative in the 88th District, he currently serves as minority spokesperson for the House Insurance Committee and is a member of the legislative committees on financial institutions, child support enforcement, prison management reform, judicial reapportionment, labor and commerce, and the Economic and Fiscal Commission. He was a member of the Amtrak Task Force in 1997 and the KidCare Task Force in 1998. Following his graduation in 1983, Brady became the founder/president and operating officer of Brady & Weaver Realtors/Better Homes & Gardens and Brady Property Management. Since 1986 he has been co-founder and secretary of Brady and Associates Construction and Development, and has been secretary/treasurer of Residential Mortgage Banc since 1991. In his multiple roles, he oversees projects of a company that is among the largest realty and development companies in downstate Illinois. Brady has served on the IWU Associates board since 1993, is a member of the BroMenn Advisory Council since 1992, and on the board of the McLean County chapter of the Susan G. Koman Foundation since 1998. He is a member of the executive committee of the National Conference oflnsurance Legislators, the Bloomington/Normal Association of Realtors, the McLean County Chamber of Commerce, and Bloomington/Normal Home Builders Association. A Bloomington native, Brady is married to 1982 Illinois Wesleyan graduate Nancy True Brady and they are the parents of Katie (16 years old), William (13), and Duncan (7).