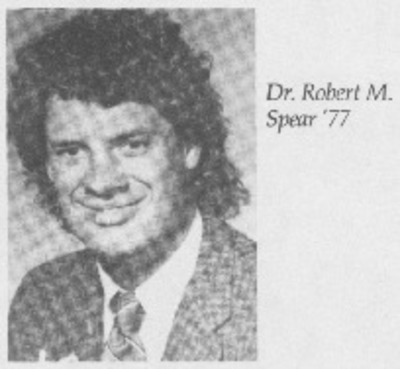 In 1987 Spear was part of a 70-member surgical team that success­fully separated Siamese twins joined at the head. He has authored several chapters in textbooks of pediatric anesthesia and pediatric intensive care, and was the first anesthesiolo­gist to use epidural anesthesia for surgery in awake premature infants. Spear, a 1980 graduate of the Southern Illinois University Medical School, came to IWU from his native Quincy and was a four-year starter on the Titan basketball teams from 1973-77. He was honored as a GTE Academic All-American in basket­ball in 1975,1976, and 1977, was an all-College Conference of Illinois and Wisconsin selection in 1975 and 1977, and is a member of the Quincy High School Hall of Fame. In May, Spear married Janet Lynn Nutt of San Diego and they reside in Coronado, Cal.