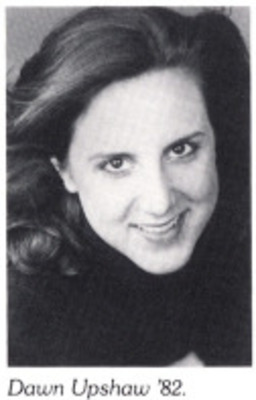 With engagements at the Metropolitan Opera, the Salzburg Festival, the Aix-en-Provence Festival, with many international orchestras and on recital programs, Dawn Upshaw's distinctive artistic personality is becoming known through the music world. After receiving her IWU bachelor of music degree, she studied at the Manhattan School of Music. Her potential as an important recitalist was apparent at the beginning of her career when she won both the 1984 Young Concert Artist International Auditions and the 1985 Walter W. Naumburg Vocal Competition, which provided her with a debut recital at Lincoln Center's Alice Tully Hall in 1986 in New York City. She made her Metropolitan Opera debut in Rigoletto during the 1984-85 season, while she was a member of the company's Young Artists Development Program. Dawn is married to 1979 IWU graduate, Michael D. Nott, the son of David and Anne Nott. David is a professor of voice and choral music at IWU. Because Dawn is touring in The Netherlands, she will be unable to receive her Outstanding Young Alumna Award in person at this time.