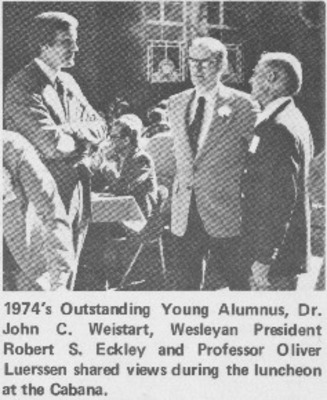 Weistart '65, is a law professor at Duke University and expert in labor and commercial law. "In 1968 he earned a juris doctor degree with distinction at Duke University School of Law, where he edited the law journal and was elected to the Order of the Coif, the national legal scholastic honor society. He later served as law clerk to the Hon. Walter V. Schaefer, Associate Justice of the Illinois Supreme Court. Presently he edits Law and Contemporary Problems, a publication that treats law-related topics from an interdisciplinary perspective, and also serves as American Developments editor for tht Journal of Business Law, a British legal publication. The author of numerous articles on labor and commercial law, his particular specialization deals with the internal affairs of labor unions. In the summer of 1971, Weistart was one of 20 law professors selected to participate in the University of Rochester's Institute in Law and Economics. Last year he was appointed visiting professor of law at UCLA. His testimony as an expert on consumer credit has been sought by several federal agencies, as well as the United States Senate Committee on Banking, Housing and Urban Affairs." (Titan Times, December 1974, p. 1)