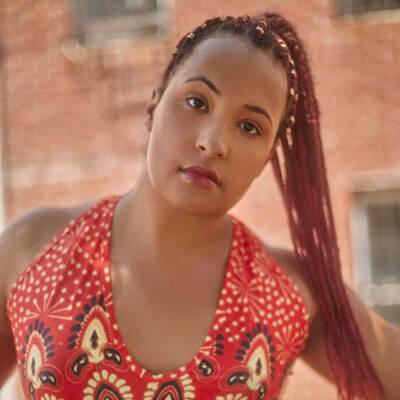 Ianne Fields Stewart ‘15 (pronouns: she/her/they/them) is a black, queer, lesbian, and nonbinary transfeminine New York-based storyteller and activist. As a performer (actor, singer, and dancer), Ianne has worked consistently in stage productions at NYC venues such as: Joe’s Pub, Dixon Place, La Mama, and many more. Film/TV acting credits include: Dash & Lily (recurring guest star), The Bold Type (guest star), and Pose (recurring). Ianne played opposite Sara Ramirez in the Emmy Nominated web series The Feels. As a writer, Ianne’s play A Dying Breed has had several productions throughout the United States including a run in New York City, and her original spoken word work has been showcased at The Duplex and Joe’s Pub. Ianne has several writing projects for the stage and television in development. An activist with a national platform, Ianne was a US Fellow for the Humanity in Action John Lewis Fellowship, and received the 2021 inaugural Logo Legends Award, among many other honors. Ianne is also the founder of The Okra Project which seeks to address the global crisis faced by Black Trans people by bringing home cooked, healthy, and culturally specific meals and resources to Black Trans People wherever they can reach them. The Okra Project gained immense prominence in June 2020 when the project announced the Nina Pop and Tony McDade Mental Health Recovery Funds which supplies Black Trans People with free therapy with Black therapists. Ianne co-organized 2020’s Brooklyn Liberation: A Rally for Black Trans Lives and delivered a speech in front of 15,000 people who gathered to march for Black Trans lives.