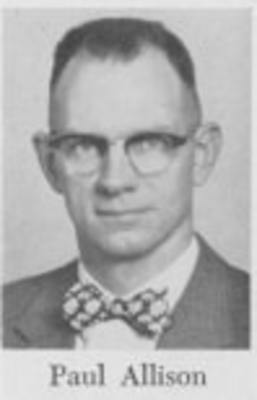 Paul Allison, who earned a degree at the University of Illinois after attending IWU, has given a great deal of time to basic community activities. He served for 8 years on the Bloomington School Board, and was treasurer of the board. He has been president of the Bloomington Rotary Club and active in the affairs of the Association of Commerce. The Wesley Methodist Church has called him to serve as president of the Official Board and to head one of its building fund drives. Mr. Allison has taken a great deal of time from his grain business and the Interstate Fire and Casualty Company, which he helped to establish and has served as secretary-treasurer, to foster the welfare of Illinois Wesleyan University. He is a member of the joint Board of Trustees and Official Visitors; he headed the 1955 drive to raise one and a fourth million dollars for buildings; and he is the general chairman of the current Twin Cities Progress Fund drive for three quarters of a million dollars for campus development.