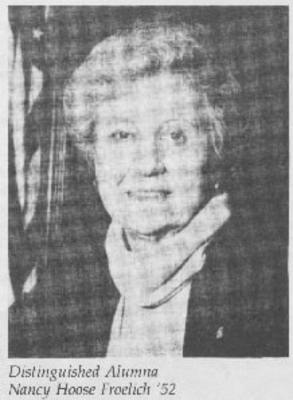 Born and raised in Bloomington, Nancy has served as chairman of the McLean County Board since 1984. She was first appointed to the board in 1981, elected in 1982 and re-elected in 1984 and 1988. A licensed funeral director, she participates with her husband, William E. Froelich, Jr. '49, and two sons in the management of Froelich Memorial Homes, PC. Appointed by Governor James Thompson in 1977 to the Board of Governors of State Colleges and Universities, Nancy has served as its chairman since 1976. She is presently serving as a member of the Illinois Board of Higher Education, as vice-chairman of the Mennonite College of Nursing and as a member of the executive committee of the Chamber of Commerce and Economic Development of Bloomington-Normal. Nancy has extensively served her community, county, and state. She and Bill are the parents of four children and have five grandchildren.